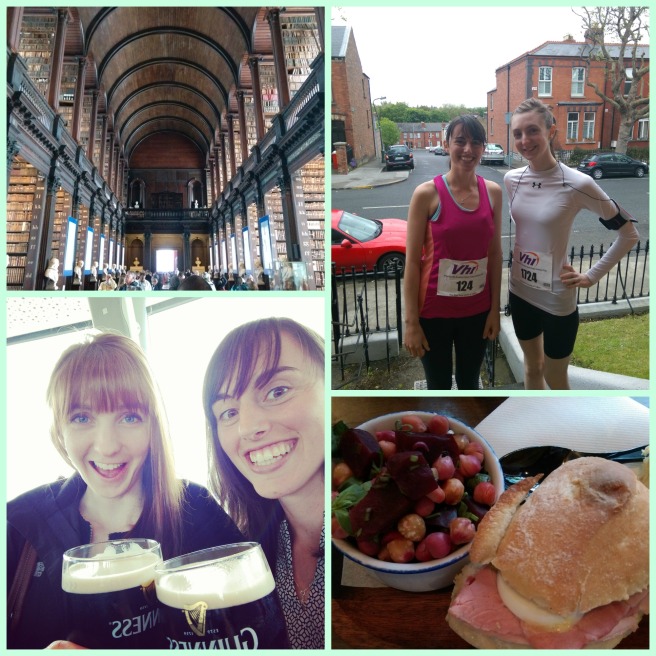 I was thinking of the best way to describe the last week and a bit and had to stop for a few minutes to think! Not because I’m sipping wine again while I post – I swear – but I’ve been thinking of how best to describe something that has been both relaxing and active, busy and calm all at once.

All things considered: it has been an invigorating past week and a bit!

If you follow me on Instagram, you may have seen numerous pictures of Guinness and other Irish things which could only mean one thing: I was back in my hometown of Dublin for a few days! Catching up with my friends and family was just what I needed. My sister is sitting her final secondary school exams.  It was great to be home and spending some time with her and my family because I know what a stressful time it is, and if anyone has worked hard, it’s her!

I also had the pleasure of bringing my friend Beth around Dublin. I met Beth in Glasgow when I first moved here and although she has moved back to her home in Cornwall, we’ve stayed in touch. It was so lovely to see her and to bring her around Dublin for the first time. Of course I also got to see my old friends Eily, Lesley and Eimear. Time is always so limited but even a few hours with old friends can be just what the doctor ordered.

But it wasn’t all fun and games. Beth and I were on a mission! With Eily, we were running the VHI Women’s Mini Marathon on Bank holiday Monday.

It’s at this point that I will mention that Beth is an incredible runner. She ran a 15 mile trail race with me last year in 2 hours and she trains a group of girls at home. So naturally she was put in with the Elites at the Mini Marathon while I was hanging in the runners section! But how could I feel alone with the thousands of woman of all ages all around me? Even though the weather could only be described as dire (my parents actually came into town with dry clothes for Beth and I) it was, once again a great event to be part of. I have run the Mini Marathon in Dublin for the past 3 years and whole-heartedly want to continue that tradition. The Mini Marathon was the first race I had ever done so it’s always nice to go back to where it all began.

I flew home on Tuesday and had a very productive day off on Wednesday. So now I am back in Glasgow, feeling super invigorated and putting some exciting plans together for the next few months. First on my list: get to the 2 hour half marathon I promised myself at the start of the year (we’re half way through already!), marathon next year? Who knows?

How has your week been?

2 thoughts on “Sunday Post – Mini Marathon and Time In Dublin”

Lately on A Venturing Girl

On A Venturing Girl